Susan Mosher (who goes by Susie off-Playbill) grew up in San Diego, CA, landed her first professional acting job as the youngest cast member in The Old Globe's West Coast Premiere of GODSPELL, and has been thrilling audiences on both coasts with her own brand of heartfelt observation and fearless improv ever since. 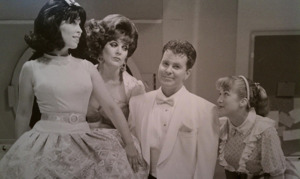 In the 80's, Susie teamed up with San Diego friends Steve Gunderson, Melinda Gilb & Bryan Scott, originating the role of "Dee Dee" in SUDS: THE ROCKING SIXTIES MUSICAL SOAP OPERA.  SUDS broke box office records in San Diego, followed by an Off-Broadway production, and has become a staple of regional theaters nationwide.  Soon after, Susie joined up again with Gunderson, Gilb & Lillias White; appearing in the original cast of the Off-Broadway hit BACK TO BACHARACH & DAVID, directed by another San Diego pal, Kathy Najimy.

Throughout her career, Susie has worked steadily in film and TV, including guest roles on BEVERLY HILLS 90210, VERONICA'S CLOSET, THREE SISTERS, SNOOPS, WITHOUT A TRACE, NURSE JACKIE, HBO's IF THESE WALLS COULD TALK 2 (opposite Vanessa Redgrave) and a recurring role on Showtime's THE L WORD.  Susie has appeared in numerous films including THE WEDDING PLANNER, LOST SOULS, VIEW FROM THE TOP, IT'S PAT and recently starred in the popular gay comedy BEAR CITY 2: THE PROPOSAL. 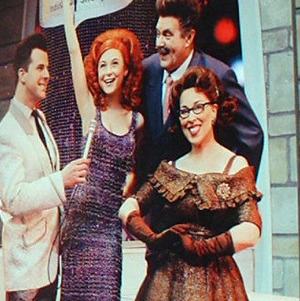 In 2007, Susie fulfilled her childhood dream when she joined the Broadway cast of HAIRSPRAY, playing Prudy Pingleton for the final two years of its glorious six year run. Susie continues to live & work in NYC, appearing in the 2013 World Premiere of Gordon Greenberg's THE SINGLE GIRL'S GUIDE and HOLIDAY INN at the Goodspeed Opera House. Susie can currently be seen 5 shows a week in the Drama Desk nominated Off-Broadway hit NEWSical! through December 2018.

If you're in NYC, join Susie every first and third Tuesday at 9:30PM as she hosts Broadway's favorite late-night musical adventure THE LINEUP at the new BIRDLAND THEATER (Click for upcoming dates and guests)